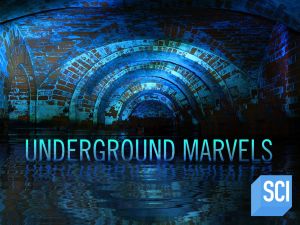 British documentary series exploring incredible feats of human endeavour underground, revealing what people have built, where they have built it, how and why.

Season 02 Episode 09 — Murder Raid Tunnels
Hidden beneath the town of Ramsgate, England, lies a hidden network of over three miles of air raid tunnels; experts investigate and uncover an extensive WWII bomb shelter that became a permanent refuge for many civilians after a devastating attack.